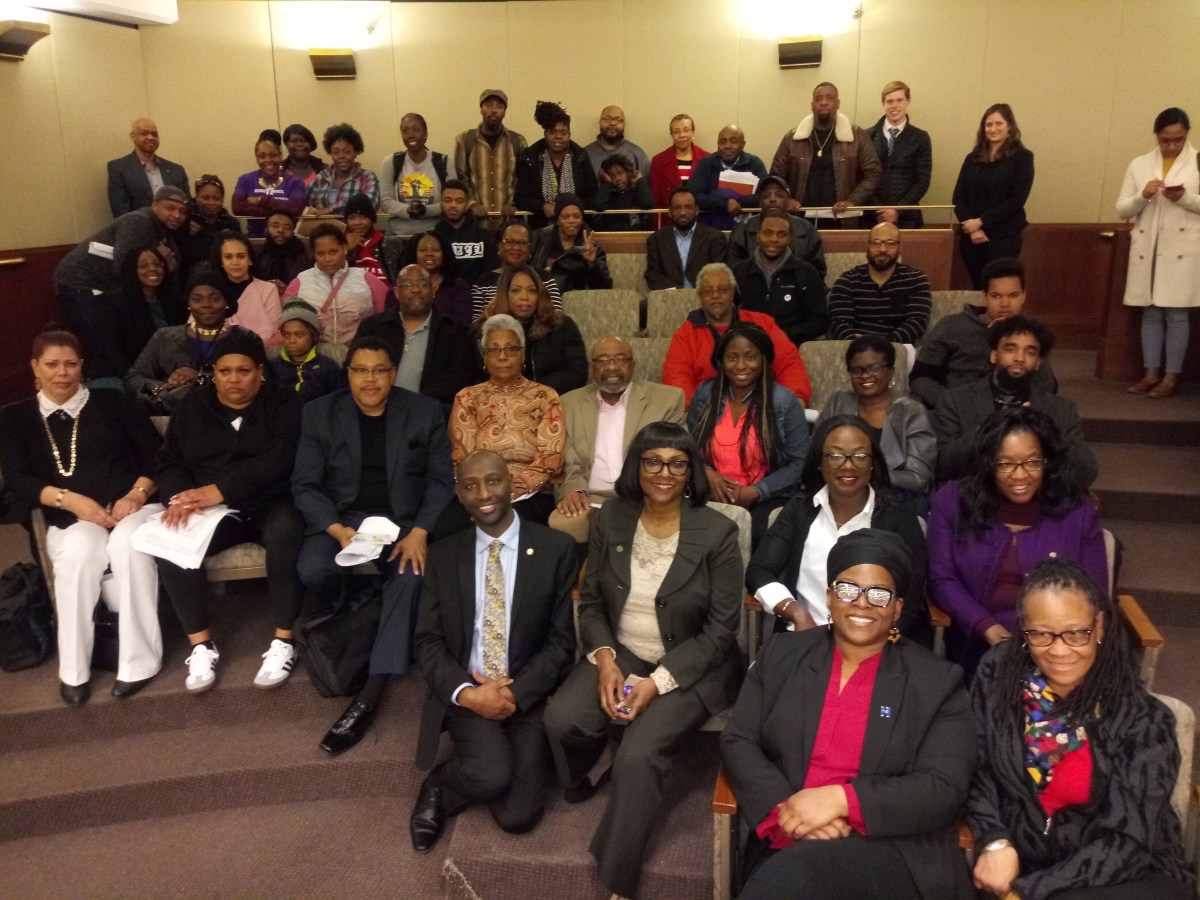 Parents, attorneys, activists and community supporters of the bill gathered in the Minnesota House after the final committee hearing of last year’s legislative session on March 28, 2019. Kelis Houston is second from the right in the second row, seated between Rep. Rena Moran and activist Sharon Greene.

By: Dwight Hobbes, The Spokesman-Recorder

"The narrative has been created by Hennepin and Ramsey County that Black parents are abusive, use drugs, are so stressed out by poverty they beat their kids,” Kelis Houston of Village Arms, a nonprofit supporting African American families impacted by Child Protection, told the Minnesota Spokesman-Recorder (MSR).

The repercussions of this narrative have proven disastrous for many of the state’s Black children. Concerned parents and their advocates are determined to redress these harmful practices through a bill in this year’s state legislative session because "Black Families Matter".

A September 12 MSR story, “The fight to keep more Black kids in their homes,” introduced the proposed Family Preservation Act. Due to the grave importance of this legislation to the Black community, this second MSR story further examines the practices that are “severing Black children from life as they know it,” in the words of one advocate, and talks with the people who are insisting this stop.

It has long been rumored that Whites in authority, especially as caregivers, teachers and other professionals, rely on stereotypes to decide if Black children should be reported to Child Protection. And some of these same stereotypes have a bearing on whether children are removed from the home.

Statistics bear this out. According to Houston, African American parents are three to five times more likely than White parents to have their children removed from their home when facing the same allegations.

The stereotyping disrupts Black households. Houston believes that the inequity is motivated by race and profit. “Our kids are being sold through the foster care system. Child Protection is a [lucrative] industry. Minnesota gets about $50 million in federal reimbursements. Our children amount to a cash cow.”

Consequently, she authored the “Minnesota African American Family Preservation Act” (AAFPA) and approached State Representative Rena Moran on the Health & Human Services Committee, where Houston testified about Child Protection. Moran, the bill’s House author, told MSR, “Having her there, [I] saw her expertise on how the system [isn’t] working for Black families, removing kids in higher numbers, sometimes for arbitrary reasons.”

Moran added, “[The committee] allowed community members to share their stories about an unjust system. ‎Their narrative is important [in] changing practices we’re seeing in the Minnesota Department of Human Services [DHS].”

“For too long we’ve failed to address the unequal treatment and poor child welfare outcomes for African American children and their families. African American children are…more likely than White kids to be reported to Child Protection, at the same time being less likely to receive services that allow children to stay in the home,” said State Senator Jeff Hayden at a February press conference announcing the bill. "Black Children Matter"

Houston’s experience as Dakota Country cultural specialist guardian ad litem and at Hennepin County’s central intake shelter spurred her to create the bill. “[At the shelter] I saw more often than not the kids on the emergency shelter unit were African American.

“Many returned three, four times a year before aging out of the system, never adopted or reunited with their parents,” explained the child advocate. “These children are severed from life as they know it—separated from parents, removed from the community. They essentially grew up alone.I watched mental health deteriorate. Some would stop getting out of bed, eating. Some who weren’t aggressive when they arrived over time became violent. At 18, they’re kicked to the curb.”

From foster care to prison

“African American children are the highest population moving from Child Protection to juvenile detention. The ‘foster care-to-prison pipeline’ is the latest iteration in a decades-long national trend which criminalizes adolescence and worsens disparities and discrimination,” wrote the Juvenile Law Center in its blog. "Black Lives Matter"

One-quarter of foster care alumni become involved with the criminal justice system within two years. Because Black kids are already subject to disproportionate rates of school discipline and criminalization, being foster youth compounds this risk. [They], particularly girls, are targeted by sex traffickers. They then risk prosecution and prison as sex workers.”

“Our African American parents have wrongful termination [of rights], sometimes simply for failing to check off an item on the case plan,” said Houston. She also cited a dangerous cultural disconnect: “We saw North Minneapolis African American kids removed to rural Minnesota.

“[One child] ran away from a farm, barefoot, and said [the foster parents] literally treated him like a slave, making him get up at three, four o’clock in the morning to feed the animals, refusing to feed him, buy clothes. We’ve had girls treated as dogs, made to sleep in kennels.”

She also recounted that molestation is common, with victims young as four being raped by other children in a household.

“I have seen [caring] social workers quit because they begged to have a foster home investigated. [And] the County refused.”

Yet another major injustice families face, according to the child advocate, is fabricated evidence by social workers. The veteran social worker related that it is common practice for a parent to have their words taken out of context in a home interview by a social worker. “It happens all the time. The narratives to support allegations. Judges rubber-stamp whatever’s brought to them.”

Family law attorney Rhia Spears concurred: “The social worker, county attorney, and the judge are all part of a system in that they see each other daily and establish rapport. Judges tend to rely on the professionals that come before them and sometimes forget that it is an adversarial process. These are professionals hired by DHS that the judges are told to trust as having the best interest of these kids in mind. Individuals who can have bias.”

The proposed bill would allow County personnel not complying with AAFPA to be charged with a felony, facing possibly two years imprisonment and a $4,000 fine. Parents would be empowered to bring suit. Houston emphasized, “We need the State behind it. Right now there’s no accountability from the Department of Human Services, which is supposed to [supervise] counties.”

The child advocate pointed out that one of the bill’s components would address the role of fathers. “Fathers are treated as strangers when it comes to their intervening on behalf of their children.”

“When Black children are removed from their mother, the [next step] should be to search for a father. Often fathers aren’t notified. The search doesn’t entail them. Or the father’s family. Dads regularly are left out of the process,” explained Moran.

Abasa Asake, who has experienced the system first hand, said Black fathers get a raw deal. “I’ve [encountered] one prejudiced event after another,” he said. His White wife, when they separated, claimed he mistreated their children. They were taken from him on that basis, despite the children’s denials of the claim.

Asake described what he called an, “utter disregard for evidence and concern for justice. I [kept hearing] this mantra about the best interest of my children. It certainly is not in their best interest, but whatever’s in the best of interest of their White parent.”

Oddly, in his situation a judge threw his wife’s case out, but child services conducted an end run and reintroduced the unsubstantiated claim made during divorce proceedings. Today, the youngsters are shuttled back and forth between parents while Asake fights it out in court.

“They tell Black fathers they’re not involved in their children’s lives,” complained Asake. “Here, one reports for duty and he’s told to go home.”

The bill calls for immediate reduction in removals, mandating measures ensuring counties proceed, in Houston’s view, more responsibly instead of assigning guilt by accusation. “They remove our children on a whim. A rumor. False allegations. Every Minneapolis school district over-reports African American students to Child Protection. Except one that has an African American social worker,” she said.

Under the act, courts couldn’t order out-of-home placement without involving agencies focused on keeping the family intact. “The bill will work to [rectify] the over-representation of these children at every point of contact with the system,” Houston said. One aim is to stop authorities resorting to removing kids as a quick fix. “It requires counties try to [access] family and community support to address whatever crisis is in the home.”

“The bill hasn’t moved at all in the Senate,” Houston stated. “DHS has been least helpful.”

DHS Acting Assistant Commissioner for Children and Family Services Lisa Bayley commented, “DHS did not oppose [the act], and worked last session with legislators on the wording. We are considering ways to address over-representation and disparities in the child welfare system, and look forward to discussing them with legislators and community members.”

Bayley further stated, “Children’s well-being [is] our priority. Our primary goal is reunification with the family. The over-representation of African American children in our child welfare system is unacceptable [and] must be addressed to ensure the system works for everyone. Our partners—counties, tribes, and community organizations—are committed, as we are, to close these disparities.”

“We [African Americans] need to leverage our vote, pushing this into the face of those who come begging for our vote when they show up [for] town hall meetings,” exclaimed Houston.

“We’re not looking for special treatment, but restorative justice. Accountability!”