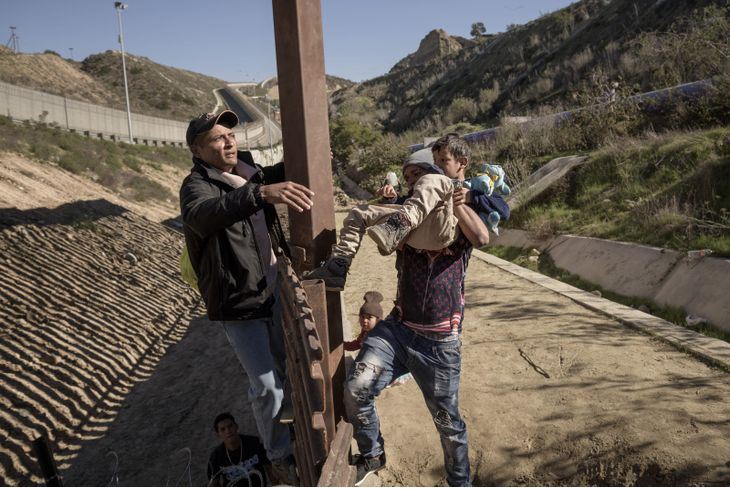 A man holds a Mexican migrant child as he jumps the border fence to get into the U.S. side to San Diego, Calif., from Tijuana, Mexico, Saturday, Dec. 29, 2018. (AP Photo/Daniel Ochoa de Olza)

The media is throwing a coordinated Festival of Grief for the two children who died after a perilous journey where they were dragged over a thousand miles of harsh desert by their parents. One caught the flu and died even after being given care in an American hospital and the other was starved to death by her father, who admitted he hadn’t given her any water or food in two days. As regrettable as those two deaths were, how it says anything about America is beyond me. But the media Enemy of the People has decided that we’re all supposed to hold our Border Patrol responsible for the bad decisions of caravaning parents. Not only that, but they are hell-bent on painting America as a heartless place.

And so it is, but not for the reasons they think. While they are doing a funeral march up and down the TV screens wailing and rending their garments for the little South American children, they are completely ignoring American foster children who are torn away from their biological families only to be murdered by their foster families. Official documents from the U.S. Department of Health and Human Services tell us that there are, as of 2016, 430,465 children in foster homes. Eighty percent of them are two or under and a majority of them are white. Contrary to popular opinion that children are only removed from parents for drug use or criminal behavior, a whopping 61 percent of them were removed for “neglect,” which is highly subjective and can be as silly as worn out shoes, ill-fitting clothes, or dishes in the sink (seriously). CPS has taken children because there was laundry on the floor or dirty dishes. Lawyers who deal with them report, “Caseworkers are notorious for noting small oversights like dirty dishes in the sink or piles of laundry,” which can land you in court for years.

So how many children have died in foster care? There’s no easy answer. If you want to know, you have to hunt through all fifty states’ local media to get an idea and there’s no way to know for sure if all of them made the news. Let’s start with the first things that pop up on a Duck Duck Go search for deaths in foster care in a 15-month period in 2016-2017.

Iowa: “The most horrific scene in my entire career,” says police officer of death scene of 16-year-old Sabrina Ray, beaten, starved, and murdered by her foster parents.

California: “The next thing we know, my little boy is on life support, and then he’s dead,” Clifford Smith said of his son who had been taken from him after an accidental injury and placed into foster care, where he ended up dead.

California: “Within days of being placed in a Stockton foster home, 3-year-old Mariah was admitted to the hospital after having eaten what was found to be methamphetamine.” She’s dead.

Texas: 15-year-old runaway in child services care hit and killed by car. This one was sleeping in a child welfare office.

Georgia: Two foster parents are charged with murder after a 2-year-old girl died in their care.

Indiana: “I proved everything wrong, and they had taken my kids away and made a case out of nothing,” said mother Angela Salinas after CPS took her 2-year-old child and placed her with a woman who murdered her.

Oklahoma: A 2-month-old Native American baby was placed in foster care and was fatally injured after only 24 hours in the foster home.

That’s at least twelve deaths in approximately one year in eleven states. If we search the remaining states we are sure to find similar stories. If there is some national database keeping track, it’s very difficult to find.

Why aren’t the media personalities in sackcloth and ashes over these deaths? And these weren’t accidental (except the drownings…maybe). Why isn’t Rachel Maddow sobbing and waggling her furious eyebrows and demanding investigations? The kids at the border died from illness and parental neglect. The children suffering in foster care are being tortured to death and not one media personality on any of the main channels can bring themselves to tears over any of them. I’m not sure they know they exist. When was the last time you heard anyone in the national media even mention these cases? Every single link is from local news. If two foreign children warrant a 24/7 media meltdown emergency, how much more outrage should twelve American children who were beaten and raped to death inspire?

NBC is reporting that “Democratic lawmakers on Wednesday called for congressional hearings after the deaths of two migrant children in U.S. custody in one month and said they were working to draft legislation requiring health standards for immigration agencies.” Why don’t any of these people demand investigations into foster care programs nationwide and the CPS agencies that keep placing children in the care of child abusers? The only possible answer is that dead children aren’t their real concern and it’s a real laugh riot watching them pretend it is.

For the record, none of our representatives are doing a damn thing about the foster care/social services crisis. The Republicans (like Rand Paul, whose state is widely discussed among parents as one of the worst for CPS abuse and corruption) are equally as useless. Attempts to ask Sen. Paul why he doesn’t pay attention to parents in his state seeking reform and justice have gone unanswered.