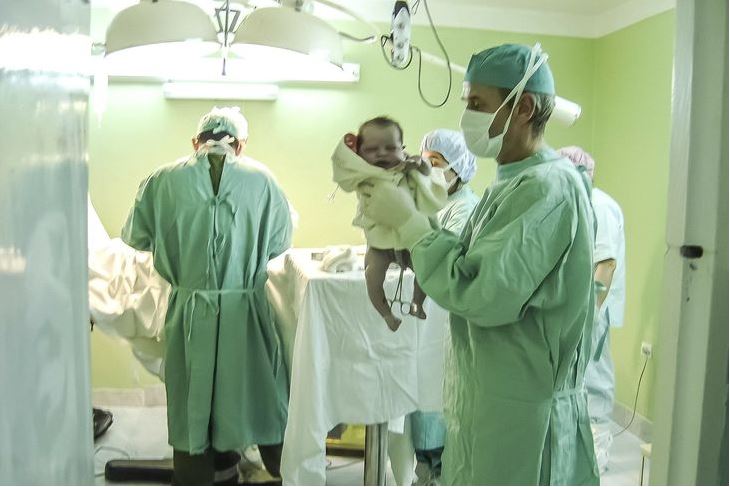 After a class-action lawsuit was filed in October against several hospitals, Illinois Department of Children and Family Services (DCFS), and several doctors, audio has surfaced of some of the defendants in the case plotting to collude with DCFS to take children away from parents extra-lawfully. Recordings of these doctors at a committee meeting appear to bolster the plaintiffs’ claims that the hospitals and agencies named in the suit “used the power given to them as State officials and/or employees and through their authorities and investigative powers to cause the Plaintiffs to be threatened and coerced into accepting unwanted and unnecessary medical procedures,” as alleged in the lawsuit.

In April of 2018, the Perinatal Advisory Committee (PAC) that operates under the Illinois Department of Health met to discuss giving injections of Vitamin K in violation of the written refusals of parents. Not all the people on the recording can be identified by voice. PJ Media reached out to the members of the PAC but none would respond to identify who is speaking. But it is certain that all persons speaking are on the committee and a list of who was there can be seen at the end of this article. The following is a transcript of the recording.

WOMAN #2: On the wording on this and I actually just texted our neonatologist cause he wanted to be here and couldn’t. We are a little concerned that it’s saying: “The hospitals will.” But it says: “DCFS may”. Mandating hospitals to do things but giving DCFS options to do things. So, then that puts the hospital in a little bit of a problem because I don’t think hospitals want to be taking over custody all the time and then DCFS may investigate for medical neglect.

WOMAN #1: Its… the issue is whether you are mandated to give vitamin k by taking protective custody. This is what this does. It doesn’t mean that DCFS has to say the parent can’t be the parent. But, it gives you the chance to give the child vitamin K through DCFS.

WOMAN #1: So, I think it is okay. You don’t need every parent to be accused of medical neglect and investigated. You need the right to give the vitamin k which DCFS will provide the custody for with this consistent message.

MS. LIGHTNER: I think you want the wiggle room of the “may” on the DCFS side because what I have heard is: If they are automatically slapped with medical neglect there’s all sorts of ramifications there. So, you want DCFS to have that… because if it’s shall…

MAN #3: So, please clarify if DCFS says “No, we are not going to investigate” but the hospital has taken…

WOMAN #1: You can take… Protective custody is just the right to do what you think is right for the baby. And, DCFS, if they say, ‘yes, that we agree with you, cause this is our rule’. You give the vitamin K and then do any of us really care what happens next?

WOMAN #1: No, because you have their… you took protective custody. That’s the part that we have to assure with DCFS. That when we do this…

WOMAN #1: Yes, that’s what I mean, DCFS has to say, ‘This is our protocol, no matter what else we do: You are protected.’

MAN #3: At what point does protective custody stop?

UNDETERMINED WOMAN: It’s two minutes or whatever it is.

UNDETERMINED WOMAN: How much beyond?

UNDETERMINED MAN: As soon as you give the injection.

UNDETERMINED WOMAN Continues: Is it two minutes? Is it ten minutes? Do we wait until DCFS says we are coming or we are not coming?

WOMAN #1: They don’t have to come. I think protective custody is you just claim that you have done it.

Lawsuit: Parents Say Newborns Were Illegally Seized after They Refused Non-Mandatory Procedures
This audio is shocking proof that doctors hold immense power over individual rights. Liberty died around a board room table in Chicago that day. Innocent parents had their children removed from their custody on nothing more than some unelected busybody’s opinion that their medical degree was more important than constitutional rights and the right to informed consent.

At least one member of the PAC made it clear that she didn’t care what happened after she imposed her will on American citizens using the power of the State. Although she may not care what happens next, when a doctor declares a parent unfit to make medical decisions and involves child welfare, the consequences are nothing short of horrific.

Medical kidnappings can and do result in accusations of “medical child abuse” by child welfare agents, leading to lengthy court battles and even the termination of parental rights. The Drake Pardo case in Texas illustrates this growing threat to families. Drake was taken from his parents and put into foster care because his mother wanted a second opinion on his condition. Theirs isn’t the only story of doctors-gone-wild with power and professional privilege. The case of Justine Pelletier resulted in national attention when Boston Children’s Hospital held a child with a rare mitochondrial disease for 16 months against her will, without proper treatment, and away from her parents in a psych ward until a judge intervened and ordered her to be returned to her family.

The epidemic of doctors taking custody of children because they deem themselves smarter and more capable of making decisions than parents is getting worse across all fields of medicine where children are seen, especially in rare genetic disorder cases. Mitochondrial Disease News reported the scary reality.

“This issue comes up over and over,” said Hollinger, director of education, support and advocacy at the Boston-based nonprofit organization. “Munchausen syndrome by proxy is a real thing and it happens extremely rarely. But this new term ‘medical child abuse’ is really a game changer. It’s basically Munchausen by proxy but with no boundaries — and it often includes medical neglect, which I find ironic.”

Hollinger, who has been with MitoAction for eight years, was previously a nurse at New York’s Albany Medical Center. She spoke about medical child abuse at an October 2017 rare disease summit in Washington, D.C., sponsored by the National Organization for Rare Disorders, which counts MitoAction among its 260 patient advocacy groups.

“We need medical professionals, but the way I see it, the families are experts on their child in a way the doctor isn’t,” Hollinger explained. “We are not all the same, even if we have the same genetic mutations.”

She added: “Child protective agencies are out there, and they work quite closely with the doctors. But they’re overworked and they know nothing about rare diseases. So, if some doctor or school says ‘I think they’re overdoing it,’ Child Protective Services will ask the name of this disease. They’re already aligning themselves — and not in your ballpark.”

The fact that doctors in Chicago are trying to expand the definition of medical neglect to include refusal of procedures that are not mandated by law, and DCFS appears to be eager to do their bidding, is unconscionable and if unchecked it will lead to more innocent families torn apart unnecessarily. The lawsuit is a good step forward to hold these people accountable, but there is no amount of money that can make right the damage that is done to a bonding newborn and mother when forcibly separated.