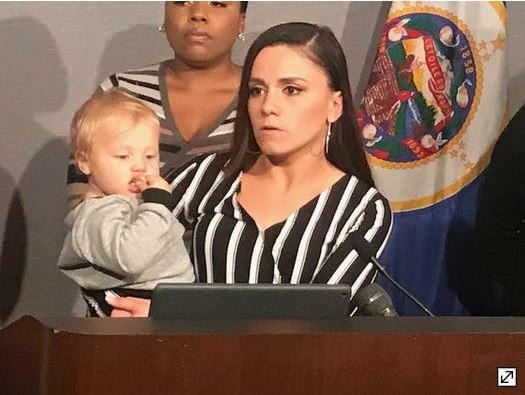 The child protection system in Minnesota is unjust and harmful to children, an advocacy group argued Tuesday, and as evidence, pointed to the decision by a state judge last week to return a 1-year-old boy to his mother.

"I am mad at the system for failing me and my son," said Amanda Weber, who brought her recently returned son, Zayvion, to a news conference in St. Paul.

The legal victory is symbolic for a coalition of parents and advocates seeking to change the state's child protection system. The group has argued that Minnesota's laws criminalize parents for what they consider to be routine parental discipline and have a disproportionate effect on black families.


Backed by members of the Family Preservation Foundation and Stop CPS from Legally Kidnapping Children, Weber told the story of how Zayvion, then 10 months, was removed from her custody in Little Falls, Minn., based on false allegations of medical neglect after her son became sick.

After three months of separation, Morrison County Judge Leonard A. Weiler ruled in August that Morrison County Social Services "had failed to prove by clear and convincing evidence that the child is in need of protection and/or services" under the state statute.

He also said that there was no evidence that the boy's mother had medically neglected the child as the county alleged.

The boy was returned to Weber on Sept. 11 after she was able to produce information about a new address and medical insurance.

State Human Services Commissioner Emily Piper said in a statement that it's common for the child protection system to return children to their parents on a judge's orders.

"These very difficult decisions are not made lightly and are always made in the best interest of the children involved. If families don't cooperate, it is even more difficult," the statement said. "When judges, social workers and other professionals evaluate and decide reunification is safe and in the best interests of kids, the child welfare system routinely reunifies parents and children."

However, Erick Kaardal said the child protection system is a "public health abuse" because counties can remove children before a trial.

He said that it was at a trial that Weber was able to show that the county's claims of neglect were false.

Weber went further, saying social service workers knew their claims were inaccurate and still proceeded to remove her son. She and advocates at the news conference said it was wrong for authorities to force her to cooperate. Zayvion was in foster care for 90 days.

The Family Preservation Foundation represents 4,300 parents and guardians who favor the "shutdown and re-engineering" of child protection services in Minnesota. In June, Stop CPS From Legally Kidnapping Children asked a federal judge to declare that certain state laws that govern when and how children can be removed from their homes are unconstitutional and deprive families of due process.